What I Wish I Could Ask My Dad

Posted on November 11, 2014 by sandrapaldrich 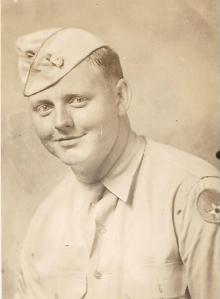 On this Veterans Day in the U.S. and Remembrance Day in Canada, I’m pondering all my dad and others like him endured as they fought in various wars. And I wish I could go back in time and find a way to get my dad to talk more about his experiences in the South Pacific during World War II. But that’s impossible. Now I understand the truth of the statement from the late author Alex Haley: “Every time an old person dies, it is just as though a library has burned.” So I ponder an old photo of my dad standing next to two of his Army buddies. Who were the other men? What’s the bombed-out building behind them? What was the date? Did the other men survive the war? But I can’t ask Dad because he died several years ago—and took almost 80 years of personal experiences, world history and family memories with him.

Over the years, I did ask him about the war. But like most men of that generation, he didn’t talk much about those experiences. At least not to his children. Or maybe I didn’t know the right questions to ask. So I concerned myself with my own little world of getting an education, marrying, teaching in a Detroit area high school, raising children—and visiting the folks every other weekend. One time, Dad and I were talking about my having worked as a civilian secretary for a ROTC Army unit while I was in college. Remembering some of the ridiculous orders I innocently had obeyed, such as being sent by a captain to “procure” items from the major’s office, I asked Dad, “What was the worse command you ever received?”

His eyes took on a far-away look, and I barely could hear his reply: “Fix bayonets.”

In that moment, Dad was no longer in his living room, but in some long-ago jungle in the South Pacific. He didn’t talk for the rest of my visit, so I decided I wouldn’t ask about the war again. I regret that decision now and have many, many other situations I wish I could discuss with him.

A while back, I asked several friends what questions they wish they could ask relatives who have died. One friend would like to know more about her father being raised in an orphanage; another friend wants details about her mother’s childhood during the Great Depression; a co-worker wonders about the two children her mother gave up after her first divorce.

Yes, we all have unanswered questions. Sometimes we didn’t know how to ask about the tough situations. Or maybe we were caught up in our own challenges and thought our parents always had been this old. Now, suddenly, the years have passed, and we find an old photo triggering questions that never can be answered. But rather than linger in regrets, I’m determined to ask details from older cousins and remaining aunts–now. We all need to ask those questions while we can. Getting the answers may require a long phone call or even a visit. But the results will be worth the effort. How about you? What questions do you wish you could ask?